One Birth in Malawi

Powerful sounds of ululating and singing emerged from the group of women outside the birthing-room of the rural health center, when the news of the baby-girl arriving to her young mother reached them. Happy news, collective joy and seeds of hope spread among the new grandmother and aunties despite the harsh realities of rural poverty in Malawi, Eastern Africa, where I lived and worked as midwife-coordinator in the early 2000s. 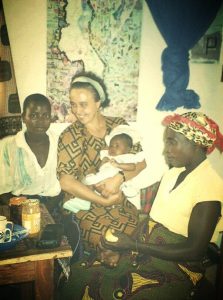 Those sounds of encouragement and love came to my mind when I was recently contacted by a grandmother-to-be, inquiring about our House of Midwives-midwifery services and possibilities to travel along her daughter in her first birth.

Empowered by her own births, she wished her daughter to experience the power that she did not yet know she had. Unlike in many Southern cultures, grandmothers are rarely present at our Northern births. Therefore this wish to secure a trusted birthjourney-companion, a midwife-doula, for her daughter felt like a very loving gift from a mother to her daughter. With love the gift was received by the daughter.

Water had been a strong element when the mother gave birth. The daughter had apparently inhaled its strength as she made a drawing of a waterbirth as a young girl. It was titled ’Waterbirth – to give birth in water you need power’.

That very picture turned out to be a powerful guide in the birthjourney of the daughter along whom I had the privilege to travel as her midwife-doula. I am sharing the pic with permission ♥

Birthjourneys are unique and so are mother-daughter-relationships. Both often contain some rough sailing too, but can equally have a very strengthening impact on the woman embarking on her path to birth and motherhood.

At the moment we are working in two places: